Languages usually reach a point of crisis after being displaced by a socially, politically and economically dominant one. Linguists describe this as a language shift. The lose of languages affects cultural diversity s most local customs and traditions are embodied and encoded in the language

According to Wikipedia, more than 50% of the world’s 6500 languages are located in just eight countries, India, Brazil, Mexico, Australia, Indonesia, Papua New guinea and Cameroon.

With more than 250 local languages or dialects, Cameroon has some of the languages UNESCO classifies as threatened as fewer people speak them.  More and more parents prefer their children to speak the more dominant English and deliberately do not teach them their local language, or in some cases, cannot speak the language themselves.

Uk based Charity Citizen Outreach Coalition COC has launched a mass media sensitisation campaign across Cameroon to encourage parents to teach their children their mother tongue and not to stop them from speaking creole (pidgin English) the most widely spoken lingua franca in West Africa.

Mokun Njouny Nelson has been talking to Francis Ngwa Niba, Chairman of COC in Bamenda, Cameroon.

Q. What exactly is the new campaign your organisation has launched across Cameroon? 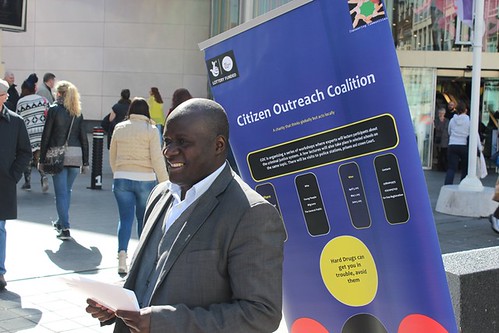 Q. Citizen Outreach Coalition is based in Faraway UK, why did you decide to come and carry out this campaign in Cameroon?

I am Cameroonian and was born in Bafut in North Western Cameroon so I am a Bamenda boy. COC might have been created and registered in the UK but our constitution states that we are a global organization. We are not going to limit our operations in the UK alone. I am presently working with a very devoted COC volunteer based in Yaounde to register the organization here in Cameroon. Our motto states that “…we think globally but act locally”. The local problem we have identified here and want to stop is the problem of parents discouraging their children from learning any other languages excerpt English and this happens to mostly English speaking parents. When the old generation does not teach young ones their dialect, they will eventually die out for lack of speakers. Parts of our customs and traditions will also die out as a result. Pidgin English is the most widely spoken lingua franca in West Africa and a stand-alone language. Parents should not be discouraging their children from speaking it. Let me digress a little here. I recently travelled to a small village inside mankon and met a local dialect broadcaster Martin Tazong, teaching his dialect mankon to school children during the holidays.

This is because parents are no longer teaching them at home. These classes would have been unnecessary if parents were doing their job. I met a prince from the mankon palace who told me frankly that even in the palace, some prince and princesses did not or could not speak the mankon language. I thought this was extremely bizarre because the palace is the last bastion for the preservation of local customs and traditions embodied in a language. When palace children don’t speak it, the language is on the highway to extinction. I learnt the Fon of mankon has now offered land where a school will be built just to teach children mankon.

Q. Cameoon has more than 250 local languages. How do you intend to carry this campaign to all these areas?

Local languages are not dying out all over Cameroon. Duala, bassa and Ewondo people for example love their local languages and proudly teach their children how to speak them. With so many languages under threat of extinction, things will only start changing when people repeat what Martin Tazong is doing, take up the challenge and also teach children how to speak their local languages. Parents should and must also assume their responsibilities and teach their children their mother tongue. What we want to see happen now is that, like mankon people trying to preserve their language through Mr Tazong, bafut people should do same, Bali people the same, Bakweri people should follow suit. We just need loads of well-meaning volunteers to do this

Q. What will you say to parents who still hold firmly that allowing their children to speak their local tongue or pidgin English, makes them have a complex or affects their mainstream education. Do you think this is correct?

It doesn’t. When children are in a school setting, the working language is English. They are taught in English and need to speak and write that. Many years ago when we were in primary school, we used to speak pidgin English a lot and those caught speaking it were punished. The school usually had a large cardboard that will be placed around a culprits’ neck saying they had been speaking pidgin. It was meant to shame pidgin speakers in School. Now things have changed dramatically. Parents have been telling their kids pidgin is not good so they end up speaking only English, albeit badly. This has not improved “O” Level English language results. English is a great language but is just one of more than 6000 languages on earth today. You cannot have “better” languages. English is an important language but even in England, you also have other regional dialects like Welsh, Irish and Gaelic. Though the official language of the UK is English, there are efforts to preserve these regional languages as English overwhelms them. This is the more reason we also need to preserve our local languages. The other languages in the UK have little or no connection with the English language and people know if things don’t change and attempts made to preserve these languages, they would be overwhelmed by English.

Q. You come from Bafut and I believe you were privileged your parents taught you your local language. Can you tell us, in Bafut, the importance of children learning their local language?

You knew this was going to be a trap question for me. I have two great parents, my dad is late now. Nice man. My mum still lives but unfortunately when we were little, they didn’t make it mandatory that we spoke only bafut in the house. It wasn’t entirely their fault because I must admit I was also very rebellious. This is what this campaign is all about. They didn’t tell us the importance of learning our local dialect but we don’t want parents of today to repeat the same mistake. Whatever the case, I can understand about 70 percent of bafut but I will be lying if I said I can speak it fluently

Q It looks like you also need to go back to school to learn Bafut?

Of course, I don’t deny that. If there are bafut classes, I will gladly enrol. I have two lovely kids and their mother is from a different tribe than me and this somehow illustrates the linguistic greatness of this country. Unfortunately, it is also the cause of our national language confusion. Which language should two parents from two different villages teach their children at home? If a Bamilike man marries a Bakweri woman, their children have two languages they could potentially learn at birth; you also have pidgin English, French and English. That is five different languages they could learn while they are still toddlers. Some parents are overwhelmed with this disparity and fail to teach their children any of their mother tongues. Children will pick up pidgin with everyday interactions with others  and French and English or both later, depending on where they were born. We should celebrate this linguistic diversity in Cameroon and not despise it.

Q That could also explain why the government has difficulties promoting the use of local languages. This will mean you have a complicated campaign?

To me, that should not be the case. Cameroon produces some of the best translators and interpreters working in international organisation because of this diversity. We have the advantage of having two official languages, French and English. These are world renowned languages and only Canada is similarly placed.  We have pidgin before more than 250 local languages. We should use this immense linguistics diversity to our advantage. I earlier mentioned two parents from two different villages who inter marry. They should teach their children the basics of those languages. The father speaks to the children in his mother tongue and the mother does same with hers. There is nothing wrong with that. There is a problem when to begin with, the parents cannot even spoke their own mother tongues. They cannot teach their children what they don’t know.

Well, let me say we cannot go and force parents to teach their children their mother tongues. This is an appeal to parents to preserve our rich cultures and traditions by teaching their children their local language. I once heard a story on BBC about two people in Mexico who are the last fluent speakers of the Ayapaneco language. One was 75 and the other 69. They lived only 500 metres from each other but were not speaking to each other. That was a few years ago. Both Ayapaneco languages speakers might be death now. That means the language is death too. We should not allow that to happen to our local languages.