More than two dozen youths around Edge Hill in Liverpool on Friday July 22 2016 learnt the basic tricks of producing stunning photos and some video editing skills.

They were the latest Merseyside youngsters to benefit from a Life Skills’ training programme organized by Liverpool based Charity Citizen Outreach Coalition. The Big Lottery Funding stream Awards for All funded the project.

The one day workshop took place in the Conference hall of Power House Foyer, in Edgehill, Liverpool. The main speaker Francis Ngwa, a broadcast journalist with almost 20 years’ experience (who has worked for various media organizations including the BBC and Reuters) drilled the youths on the basic fundamentals of taking good photographs and videos. With two Canon Cameras, Mr Ngwa lectured the participants on the necessity for shooting creative pictures and videos using manual mode and not the widely easy to use auto focus mode (point and and shoot) system most amateur photographers use.

A hands-on practical workshop, each of the participants took turns in using the cameras and shooting in manual mode. The exercise was daunting to begin with but they later caught up and some were shooting with good results by the end of the workshop.

Among other things, the participants learnt why tripods, reflectors, drones, extra lights and other photographic equipment were necessary to shoot award winning photographs and videos. They had a chance to use some of these equipment. 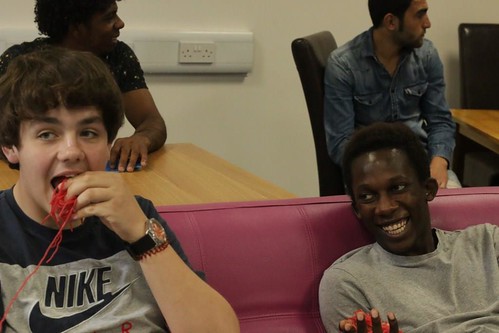 “Photo and video production has a wide range of various professions that young people like you could get interested in from freelance photographers to graphic designers”, Mr Ngwa told the youngsters. “If I knew most of what I know today in photo and video shooting and editing, I probably will not be standing here and talking to you…I probably will be running the UN radio or Television”, he said to the amusement of the participants. One of them quipped “it is still not late”.

Shaquille Osayi 20 said he was impressed with the lessons and like most people, had always shot using auto focus. He promised to start shooting using manual so he could get much better images and videos and could be creative as well. “I have learnt some good tricks here and will be using them” he said. He started shooting and video editing when he was only 14.

Another participant who did not want to be named said the workshop helped him improve his shooting and editing skills since he had done some editing before. He was grateful to Citizen Outreach Coalition and The Big Lottery for funding the workshops that were helping to improve the skills of young people.

The workshop ended with some light refreshment for all participants.