The occasion might have been solemn; the commemoration of more than 300 years of slavery and the slave trade but it was another opportunity to display the rich colour, prints, arts and dance from Africa. The commemoration was organized by the Liverpool International Slavery Museum on Tuesday August 23 2016 and was the culmination of weeklong annual activities to mark slavery remembrance day. The essence of the annual ceremony is to spotlight the evils of the slave trade and slavery and why like the holocausts, it should never be allowed to happen again

From the remembrance walk that started from Liverpool City Centre to the dockyards, to the libation ceremony near the waterfront, there was the conspicuous presence of colourful African prints from South Africa, through Ghana to Nigeria.

The main actors of the day, were mostly descendants of Slavery Poet Patrick Graham kicked off the artistic part of the ceremony inside one of the halls of the Martin Luther King Jr building at the Albert Dockyard where the slavery museum is located. He recited his  seminal poem “PROUD” in which he celebrates the resistance of everyone, including slaves and  free men “…who kept up the fight” to abolish slavery. “Freedom, the ultimate prize to pay, that is why I am here to stay…” Patrick recited to applause from the guests in the hall 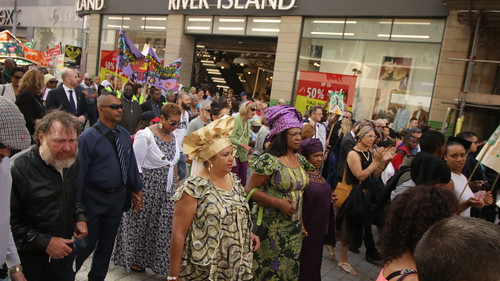 Oludele Olaseinde, Liverpool based musician who runs the River Niger orchestra provided the backdrop Yoruba traditional drumming and dance while Chief Angus Chukuemeka from Crawford House carried out the libation ceremony at the waterfront. Chief Chuluemeka said the libation ceremony “…offered an opportunity to remember and reflect on one of the greatest human tragedies…” that slavery and the slave trade represented. “Today we remember your sufferings, trauma and humiliation during your enforced journey. We also remember the great sea of the Atlantic…through whose course the seafarers of Liverpool and Europe, conducted the trade in Slavery”, he added.  Chief Chukuemeka then asked for forgiveness for the part Africans played in promoting the slave trade and called on his ancestors to bless the drink he was offering to them as part of the libation.

“We love it. …it is almost the same. We also do something like this in our culture but we use African beer” she said beaming.

The ancestors were offered wine and called upon to bless the ceremony. It all ended with the throwing of symbolic rose flours and a wreath into the water.

“We need to celebrate Africa” Kitty Moikangpa  from South Africa said. She added that apartheid that has since been banned in her motherland, was also another form of slavery. It should also never be allowed to happen, as slavery must be remembered and never allowed to happen again she concluded.

A leaflet produced by The International Slavery Museum, main organizer of the events said it is important to commemorate the day because it throws a spotlight on “…the lives and deaths of millions of enslaved Africans and their descendants who were central to the rise of Britain as an industrial power”. 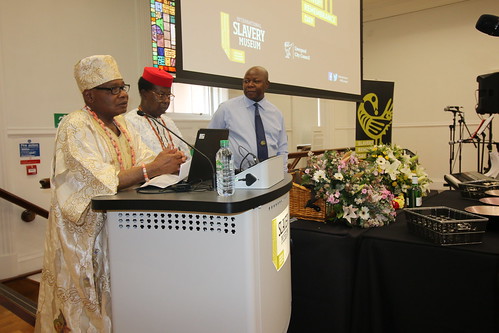