Some residents of Liverpool were again reminded of the dangers that gangs, guns and drugs do to the community when Liverpool based Charity Citizen Outreach Coalition (COC) took their campaign bus to the City centre on Saturday March 11 2017.

With an array of support materials including a public address system, potable banner carrier, thousands of flyers and a 3 metre long banner, COC wanted to make its latest Big Lottery Awards for All funded project reach as many Liverpool residents as possible. The three hours campaign kicked off slowly but soon attracted hundreds of passers-by as they stopped to enquire about the project and its aims and objectives. “Just Say No 2 Gangs, Guns and Drugs” was the simple but very effective message of the campaign mostly targeted at young people.  COC project manager Francis Ngwa said “ gangs, guns and drugs cause serious problems in our society today. These three evils have sent countless people in Liverpool and across the UK either to hospital, prison or in extreme cases, early deaths. Just saying no when you are tempted with any of them saves lives”, he emphasised. 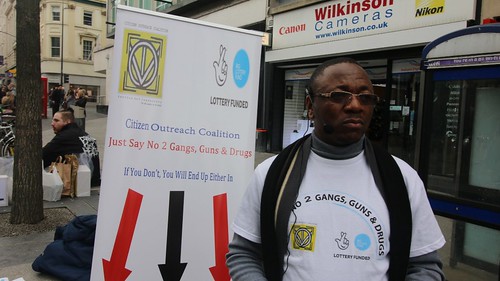 A Targeted Campaign that got people talking about Crime.

Hundreds of flyers were handed out to residents out mostly for shopping in Liverpool city centre while those who had time, stopped by to listen to some of the volunteers as they explained the reasons behind the campaign. All those who accepted were also given free white T shirts with the slogan of the campaign “Just say No 2 Gangs, Guns and Drugs” emblazoned on them.

One of the volunteer campaigners and COC member Kiven Emmanuel said he was “honoured” to be part of a campaign that could save so many people. “One of the ladies I spoke to graciously accepted a flyer I gave her saying she supported our campaign which was dear to her heart. She said her son had the good sense to refuse when he was offered the white stuff” he said, a reference to cocaine that was destroying many lives across the country. “Just Say No is a short powerful message that anyone can understand, young or old, educated or uneducated, rich or poor and black or white”, Kiven said. 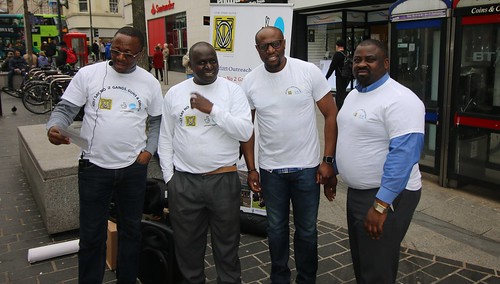 The campaigners pose for the Camera.

Citizen Outreach Coalition organised the City centre campaign in partnership with Leeds based organization SpringAid Consultancy that was represented by its CEO Valentine Nzeng. He helped in the leaflet and T shirt distribution. According to Mr Nzeng: “if young people are sensitized on the issues of gangs, guns and drugs, it will help them avoid prison, hospitals and quick deaths. We are asking them to stop and just say no each time they are faced with drugs, guns or getting involved with gangs. No is the easiest word to say and can save the lives of thousands of young people”.

Another volunteer Oluwole Oridupa from community organisation  “Generation Revive” described the campaign as challenging but fulfilling because he had a chance to interact and speak with a wide range of people in Liverpool. Hear him;

“It is a laudable initiative especially to the young but also to old people especially those who are prone to violence. Just say No are the kind of projects that need to be funded throughout the UK”. 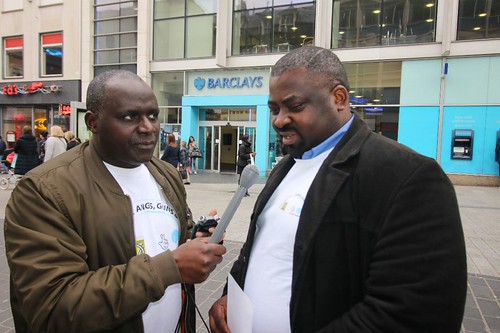 Aaron Donaldson originally from Jamaica said he had faced loads of challenges in the UK and gladly accepted his campaign T Shirt. He promised to talk to many young people as possible to send the message of the campaign across to them.

COC will be organising other street campaigns and a series of workshops with young people as part of the present campaign. 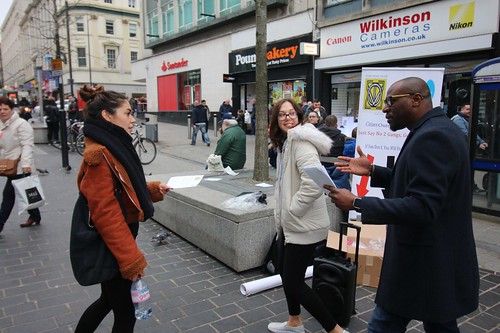 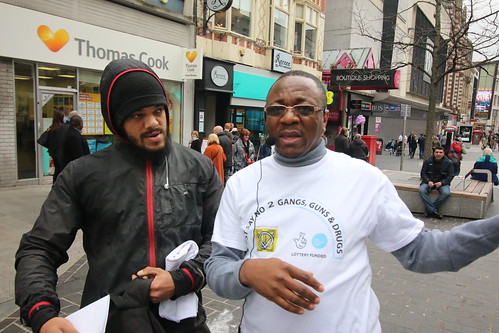