Dec 26, 2017
francisngwa
Uncategorized
Comments Off on Can Miss Zambia Conquer The World?

Can Miss Zambia Conquer The World?

As has been the case for the past 43 years, there are hopes Musa Kalaluka 20, who was recently crowned Miss Zambia 2017 might surprise everyone and win Miss World 2018 scheduled tentatively in the Philippines Capital, Manila. If she can achieve that feat, she will become the first African to ever win the trophy and the glory and fortune that follows the world title.
To win the world title, Miss Kalaluka had to first conquer Zambia and she did it in grande style.
Musa Kalaluka was last Saturday December 16 2017 crowned the New Miss Zambia. She beat 12 other contestants to the coveted crown. Cecilia Abba 23 and Norah Kondwani 24, won second and third place in the nationwide competitions. The event took place at the Lusaka Government complex and award winning Ghanaian actor John Dumelo (who always has an eye for the ladies) was one of the judges.
The beautiful model who wore a stylish dress designed by Kabaso Nkandu Yoram became the 43rd Queen to scoop the title since the pageant was introduced in 1974. She will represent Zambia at the prestigious Miss World 2018 beauty pageant with hopes of becoming the first Zambian to win the crown of glory 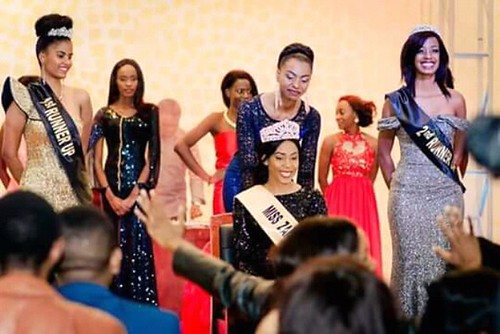 She did not hide her delight at her triumph.
“I am delighted to have won, I didn’t expect it. Only God knows how I felt at that moment. I’d be lying if I said I did this all alone… I’m overwhelmed by the love and support I received throughout my journey,” Miss Kalaluka gushed in her first post red carpet win interview.
On facebook, she thanked everyone that supported her rise to prominence and the coveted crown. She said she will be campaigning to improve the livelihood of widows and senior citizens. 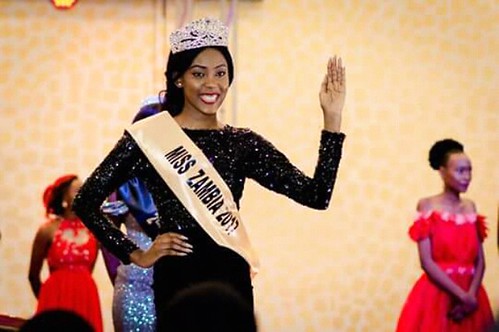 Musa waves and smiles after she is crowned.
During her social work task to drum up her campaign towards the grand finale, in August earlier this year, Musa volunteered at a village in Chongwe District. She took care of senior citizens, widows and orphans and donated groceries and other notables to them.

But all this wouldn’t have been possible if not for proper mentorship and support rendered to Musa by the Zambian Women With Skills Organization (ZWWS). The ZWWS organization who’s focus is on mentoring women and helping them realize their potential, is a leading NGO which created in 2014 by Bwalya Maketo

Her predecessor, Mwangala Ikacana congratulated the newly crowned Queen on achieving the great honor and wished her all the best in her modeling career and reign. She also had some words of wdvice for Miss Kalaluka
“As you begin your reign, remember to be humble and know that the true crown is in your heart and not on your head”
Mwangala described the finale as a success adding that the set up (stage, entertainment, fan turnout etc) was the best environment to choosing a new Queen.
Cecilia Abba who scooped the first runner up prize cheered up the losing contestants. Cecilia observed that the journey to the finale was not an easy one and described all 12 contestants as winners in their own right.
Matilda Rupenzo, a losing contestant, posted an apology to her fans and supporters on Facebook for having not made it. She further stated that she was proud of herself for taking part in the pageant and congratulated the winners.
As always, a large crowd of spectatators and onlookers was on hand and cheered the contestants during the presentation and selection process.
Some fans were spotted wearing matching t-shirts with names of their favorite models imprinted on them.
The other contestants who fought but lost the title included, Mutinta Mudenda, Cecilia Abba, Maimbolwa Ingombe, Sheila Sings, Taonga Malenje, Zamiwe Maida, Helen Chanda, Matilda Rupenzo, Norah Kondwani, Mwila Chansa and Chyna Minho Ann.
Platinum Events Productions Africa was the main organizer of the pageant