Aug 14, 2017
francisngwa
Uncategorized
Comments Off on Oral History Merseyside. The Dentist & the Pastor

As we continue recording the oral history of Africans who have made Merseyside home in our Heritage Lottery Funded Project The Definitive Story of Africans in Merseyside, the story of two ladies from the continent, a Ghanaian and a Nigerian stand out; the unassuming singing Dentist and the Pastor driver who never takes no for an answer.

Â Mme Helen Ajibola Renner 84, arrived in the UK first in 1948 on a ship from the then Gold Coast (present day Ghana) as a 15 year old starry eyed teenager with her twelve year old sister in the company of their mother, to study at the Cheltenham Girlsâ€™s school in Gloucestershire. She recounts how she was sea sick during the twelve days journey and how arriving in Liverpool did not prepare her for her first glimpse of her adopted country.

It was grey, it was in May and it was drizzling and it was coldâ€¦ All the buildings were black, everything was black and I just couldnâ€™t get it out of my head.that buildings could be blackâ€¦that was from industry and the soot and the cold fires made all the buildings black.

After completing school, she enrolled at the Guyâ€™s Dental College in London as the first black female African to do so. She eventually got married to a Sierra Leonean man she met in at the dental school, had three children and had three children the youngest who is 50 years old now. She worked as a dentist from 1958 to when she retired in 1990 and also served as a magistrate. Mme Helen loves singing and is still an active member of the Liverpool Harmonic Gospel choir. 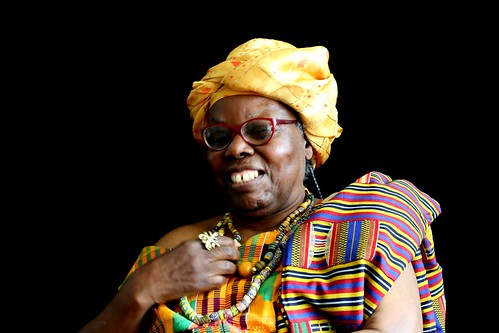 Does it mean there wasn’t enough foot to eat?

You did but you didnâ€™t have much choice. When my mother and one of her cousins and his wife came to visit in the year of the festival of Britain, I think in the summer of 1951, they brought rice. You couldnâ€™t get rice to buy even with coupons in the shop excerpt rice that you could use for making rice pudding, not rice that you boil to eat with other things. The war was over but there was food rationing and cloths rationing as well. So you had to have coupons to buy food. Everything was different, trains were not so frequent and they were steam trains. Now when you are booking a seat on a train, they ask if you want a table. They used to ask if you want to face the engine or have your back to the engine. This is because if you face the engine and the window is open, soot from the train comes to your face. You were looking to have your back to the engine. There was a new fashion called new look where skirts became longer because during the war, skirts were shorter

I shared a flat with one of my other brothers in St Johnâ€™s Wood and then I moved out and shared with one of my friends from Achimota School (from Ghana) as well. We had a flat in Kilburn and some of our other friends had flats in the same area. I think there must have been a landlord who had bought a lot of houses there and was turning them into flats and hiring them out to people and that is where we got our flats. Those were the days when they advertised flats to let with no blacks, no Irish, no dogs. So when you were looking for a flat, when you got through to the landlord, you told them that you were black because you donâ€™t want to arrive there and be told no blacks, no Irishâ€¦ or be told it has been let already because that was the other thing they used to do.Â  That happened more often if the landlord was living on the premises. We were lucky we got this flat.

.Mrs Matilda Ngozi Egbumokei popularly known as Mama T grew up in Lagos Nigeria and arrived Liverpool with her husband who works with the Nigerian shipping company in 1987.Her traditional Nigerian name means Godâ€™s blessing is the greatest given because her mother kept having only boys and she was the first girl in the family. Her father doted on her as a result.

For the last 31 years, Mme Matilda has done different things t0 put food on her table including hairdressing and operating a taxi (which she still does now) first with Liverpool taxi company Delta and now with Uber. In 1996, she claims she spoke Directly with God and he asked her to start a prayer group which has since developed into a Pentecostal church now called The Faih Ministry

On the 1996 Vision when she spoke directly with God

I go to church and come back, there is no difference. ..It got to a stage where I needed more and nobody could give me that. There are some questions I ask, and I couldnâ€™t get an answer. So one day I heard people saying God said, God said and I said, it means God talks to people and you can talk back to him? I wanted that. I had read it, ask and you shall receive. That day, it was in the morning, second Saturday of |December 1996. Christian channel just started and it was between 4am and 7am. All the people who ministered were saying God said this and I said thatâ€¦ahh, afyer 7 oâ€™clock, I switched off the TV. I was lying on a settee. I said today, I must hear you (God) talk to me today but I only have 30 minutes, because my son had to go and play football for the school team and the hairdresser travelled to Nigeria and left me in charge of the saloon and I hate lateness

I said I had 30 minutes. I wanted to hear God talk but I was doing the talking until he said, keep quiet. Ask me what you want. So I said I needed to bind fear in my life, bind doubt in my life, set your blessings in my life/ I sat quite and he said, Is that all? I said no, my first daughter then was giving me a hell of a time. All that I am not used to, was what she was doing. So it was a problem for me and I wanted God to deal with that for me. He said, forget your daughter; she will come to know me and she will be great. Are you ready to follow me? I am saying it verbatim. I said youÂ  lead the way and I will follow. I felt myself get up and we went on this long journey. He showed me things, beautiful places and then he gave me an image of a little white girl.I asked what business did I have with this girl? He didnâ€™t answer that question. He showed me images from different children from all over the world, all happy. He said if you follow me, I will make you as happy as this children and I need you to start a prayer groupâ€¦

In which language did God speak to you?

As I am talking to you now, it was as clear as it was. I could hear him clearly. Â